2. Click on the battlefield to summon (Zombies requires a grave)

The bottom bar is your life, and also what you pay to summon your minions. Be careful, as you don't want to run out of currency, but surely don't want to be left with no defenders.

## Lore
You are a Necromancer that is constantly raided by "Heroes", luckly, you know how to call the dead to protect yourself, but it has a cost, every ritual made for summoning a creature needs a blood sacrifice.

### Necromancer's Blood
The same HP that commands when you lose is the currency for buying minions.

## Minions
### Zombie
You need to have a grave on the floor, when it hits someone that is about to die, this someone have 50% of chances of becoming a zombie. Zombies lose HP over time.
Attack type: Surrounding area.
Swarm Debuff: Yes

### Vampire
Fast, but fragile. A Vampire can regen his HP by attacking, doing it will regen a little bit of the necromancer's Blood.
Attack type: Single
Swarm Debuff: No (Single Target)

### Skeleton
Slow, Weak and fragile. But cheap! When a Skeleton is not engaged in a battle, it returns to his spawnpoint.
Attack Type: Surrounding area.
Swarm Debuff: Yes

## Heroes
### Thief
Fast and it can get closer to his target before being detected.
Attack Type: Surrounding area.
Swarm Debuff: Yes

### Mage
It will flee away from close combat, until it has between 60~100% of the attack range, then, he will shoot a magic sphere that damages the first enemy it contacts.
Attack Type: Ranged.
Swarm Debuff: No. (Single Target)

### Warrior
Strong, Though and ignores SwarmDebuff. He is a nightmare. (And yes, it will get a little nerfed in the future)
Attack Type: Surrounding area.
Swarm Debuff: No (Imune to SwarmDebuff)

*Swarm Debuff divides your damage by the amount of enemies hit by the attack.

I Hope you have lots of fun playing this game. 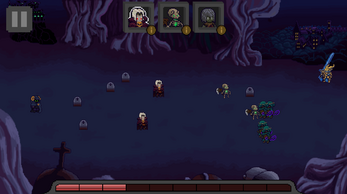